How much do exchange rate fluctuations affect forest product revenues?

In the past 12 weeks the US$/C$ exchange rate has fallen by more than 0.05, reducing the value of the Canadian dollar to 0.90 US$, the lowest it has been since the 2009 recession. Aside from the obvious impacts, such as that the prices of flights to the U.S. are now more expensive, there are other important effects—particularly in terms of creating what are in effect additional revenues for Canadian firms that export products priced in US$, but whose production costs are almost solely priced in C$. A good example is the Canadian softwood lumber industry. 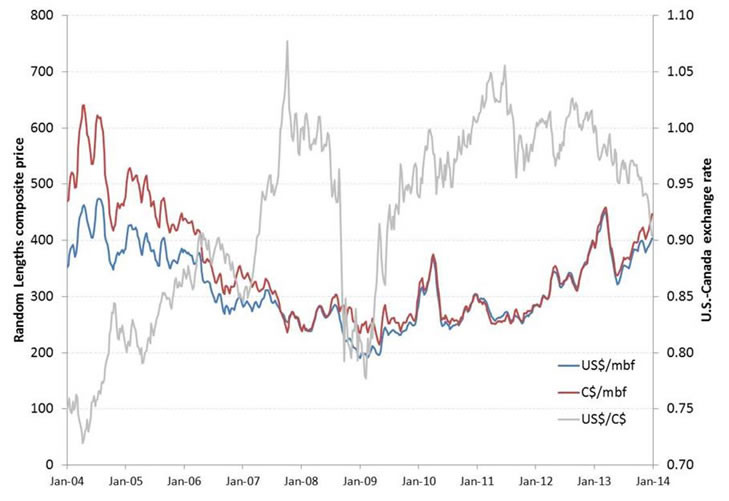 The more the exchange rate falls below parity, the greater the return to Canadian softwood lumber exporters (as seen by the divergence between the red and blue lines in the above figure). For instance, at a US$/C$ exchange rate of 0.90, Canadian exporters receive 11% more revenue (on average) than U.S. competitors. At a rate of 0.85, this benefit increases to 18%.

From June 2007 to December 2013 (with the exception of the recession) the exchange rate fluctuated between 0.94 and 1.06, quite close to parity. Indeed, since June 2010 the exchange rate has averaged 0.99. For more than 6 ½ years, markets have been used to C$ and US$ returns from the softwood lumber trade being essentially the same. However, if the new lower exchange rate becomes “baked in” to market expectations, exchange-rate-induced benefits will increase the relative value to shareholders of Canada-based softwood lumber exporting firms—a phenomenon that several leading private sector financial analysts (including RBC Capital Markets) have noted is already occurring. Higher share valuations would give these Canadian-based firms an advantage in funding M&A activity and investment, accelerating their transformation and recovery (except, of course, where those activities would require making major purchases in US$ denominated assets).

But why would the expectation of a “new normal” for exchange rates crystallize in market consciousness? Two explanations seem most likely. First, the value of the U.S. dollar has been held down against most currencies for several years due to a poor outlook for U.S. economic growth, consumption, demand for liquid assets (chiefly, dollars) and interest rates. However, the U.S. economy is finally showing signs of returning to a stronger growth trajectory, which is improving these outlooks, thereby increasing expectations for the value of the U.S. dollar relative to other currencies. All else equal, this would be occurring regardless of any domestic Canadian factors. Second, however, is that there are Canadian factors. After years of unspectacular but steady growth, Canadian economic expansion has slowed in recent months. This has led the Bank of Canada to change its language regarding its outlook for Canada’s economy, causing financial markets to adjust their expectations for Canadian interest rates. Pre-existing interest rate expectations had been contributing to the value of the Canadian dollar vis-à-vis the U.S. dollar, and the resulting downward adjustment is contributing to the exchange rate decline. Given these two shifts, markets are clearly suggesting that they expect a new exchange rate regime, below parity, to last for the medium term, at the very least.

We will leave discussion of whether or not this lower exchange rate is a “good thing for Canada” to others, but will confidently assert that Canadian softwood lumber exporters, and their shareholders, will certainly think so.