The final data are now in for 2013: North American demand for newsprint has now fallen for 14 consecutive years. 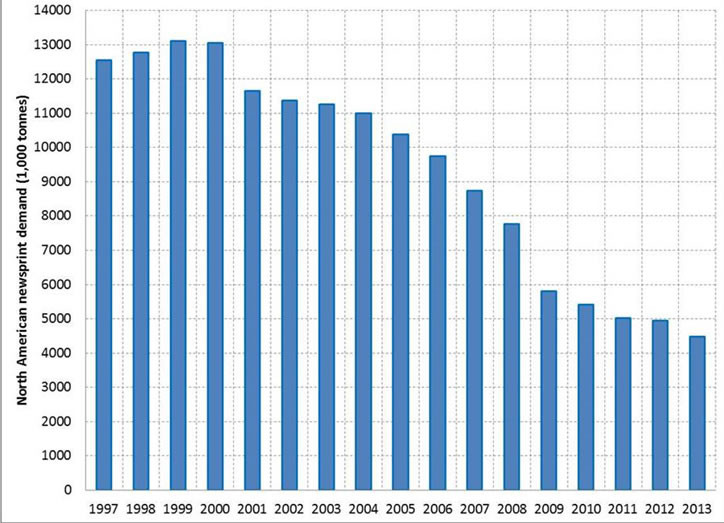 North American newsprint demand peaked in 1999 at just over 13.1 million tonnes, and at the close of 2013 had fallen by two thirds, to less than 4.5 million tonnes. While some commentators prefer to talk as though the recession-influenced year of 2009 is key to understanding the decline, it doesn’t particularly stand out from the figure above, nor has there been any bounce back. Since 1999 the average loss has been 7.4% per year, a rate which has been surpassed in two out of the last three years (2011 and 2013). Indeed, the loss of demand in 2013 (-9.4%) is the fifth greatest annual percent loss since 2000, and the largest since 2009.

There is no reason to believe that a similar loss (~7.4%) will not occur in 2014. When combined with what is expected to be a relatively poor year for offshore markets (in which North American exporters will face stiff competition from struggling European producers) this could require up to two mill closures (or repurposings) in North America, likely by mid-year. Recent $CAD declines relative to the $US will provide some relief for Canadian producers, but newsprint producers will need to continue to cut costs (e.g. through targeted capital investments and efficiency gains) to position themselves as candidates for maintaining production through the medium term.