When priced in Canadian dollars, North American Northern Bleached Softwood Kraft (NBSK) list prices have shown steady growth over the past decade, increasing on average by $15/tonne per year over that period. This is a counter-intuitive result for some market-watchers, given that demand for the primary end-use for NBSK (printing and writing papers) has declined considerably (by 25-33% depending on grade) over this period, with multiple mill closures as a result. One would expect that, all else being equal, this would result in a declining price, since presumably the remaining mills would be in intense competition with each other, and the lowest production cost mills would be the least likely to close, resulting in lower marginal production costs for the sector and a long-term trend towards lower prices as a result. This is, indeed, the pattern that has prevailed in the newsprint sector, for instance.

Many (not mutually exclusive) explanations have been given, including: rising fiber and energy costs, limited global capacity in the face of increased demand from higher value uses such as tissues and packaging, and conversions to dissolving, fluff and other higher-value chemical pulp grades. However, a strong contributor to this effect is rarely considered: the role of discounts to list prices given to long-term customers. 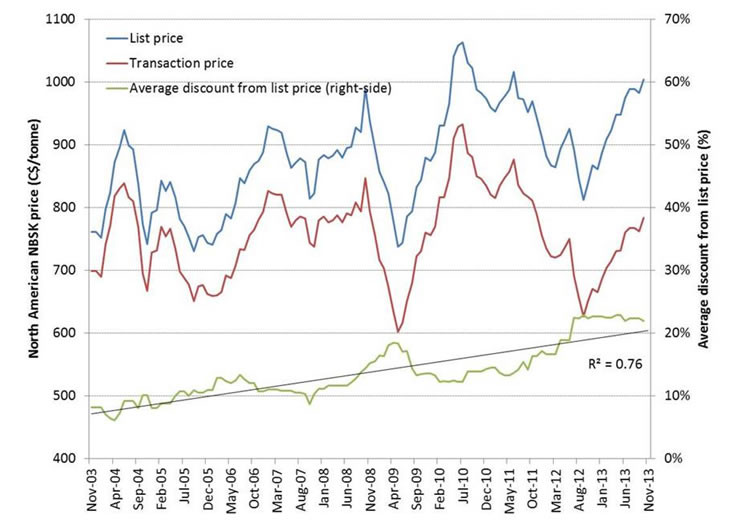 Over the same period that list prices have increased by (on average) $150/tonne, actual transaction prices have been almost completely flat. This is because of a very stable increase in average discount from list price per transaction from 8% in 2003 to 22% in 2013. This significant increase in discounting is also clear in other chemical pulp grades, such as Bleached Eucalyptus Kraft pulp. While one cannot claim to explain this phenomenon with absolute confidence, it seems likely that the rise of discounting results from a confluence of interests for market pulp buyers and sellers. Pulp makers have an incentive to provide larger discounts to paper manufacturers as the potential buyers gets smaller due to declining paper consumption: discounts are an important tool to capture and maintain customer loyalty. At the same time, paper manufacturers have an incentive to boost pulp market prices: the appearance of rising input costs provide a tool to justify higher paper costs to their own customers. These incentives contribute to a market with strong upward pressure on list prices despite declining demand and ever increasing overall efficiency. It should also serve to remind analysts of the importance of not only converting US$ denominated prices into producer currencies (so as to limit exchange rate effects) but also to access transaction prices where available: headline numbers don’t always tell the whole story.