The Canadian Intersite Decomposition Experiment is a cooperative study of 20 researchers from the Canadian Forest Service, universities and provincial ministries investigating the long-term rates of litter decomposition and nutrient mineralization over a broad range of forested ecoclimatic regions in Canada.

Increasing concern is being expressed on the effects of the predicted changes in climate on forest carbon budgets and how forest practices should be adapted to cope with these changes. Canadian forests contain large amounts of carbon stored in trees, soils and decaying plant litter and may prove especially sensitive to climate changes, specifically global warming, predicted for northern latitudes. Changes to the forested land area and the balance between the uptake of carbon from the atmosphere by plants through photosythesis and release of carbon through fire, respiration, and decay, would affect levels of atmospheric carbon dioxide. Carbon dioxide is an important greenhouse gas and increases in its level have been linked to global warming. Warmer temperatures would increase decay rates, releasing carbon stored in soils and litter and thus have the potential to accelerate the rise in atmospheric carbon dioxide levels.

Currently, several projects are underway to quantitatively model the current and potential changes in the carbon budgets of Canadian forests to climate change. Information is limited for many of the processes being modeled, particularly those related to soil processes. Of major importance is the rate of litter decomposition which is lacking in extent and length for most forest ecosystems. To overcome this data deficiency a group of researchers from across Canada have been assembled to conduct a long-term decomposition experiment.

The Canadian Intersite Decomposition Experiment (CIDET), is a cooperative study of 20 researchers from the Canadian Forest Service, universities and provincial ministries investigating the long-term rates of litter decomposition and nutrient mineralization over a broad range of forested ecoclimatic regions in Canada.

The experiment has the following objectives:

The study established in 1992, involves the preparation and placement of close to 11,000 litterbags comprised of 10 sets of 12 litter types (Table 1) in each of four replicate plots at each of 21 sites. Each year for ten years, one set of bags is removed per plot and analyzed for weight for weight loss and carbon, nitrogen and phosphorous content. 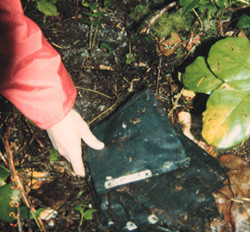 Relationships between decay rates, substrate quality, and climate will be established using regression techniques. Information on an array of site factors, soils and, where possible, microclimate from each site will be used in a multivariate analysis to test for site and microclimate effects. Moisture effects will be studied by comparing decay rates at two spatial levels: