For over 15 years, the EcoDIF laboratory research program under Christian Hébert's supervision has focused on the ecology of species: Study of insect pests and their natural enemies. The research areas included are: 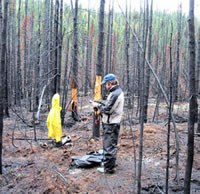 In a context of increasingly scarce timber resources, there is a potential for substantial harvests by salvaging fire-damaged wood in recently burned areas in order to help maintain a satisfactory volume of wood for the forest industry. However, several species of longhorn beetles are quickly attracted to the sudden availability of food and cause significant damage by digging numerous tunnels under the bark of tree trunks. Consequently, the activity of these longhorn beetles severely affects the quality of the wood for saw timber purposes.

The main objective of the project is to develop a model for predicting the damage caused to sapwood by longhorn beetles. We will first determine the seasonal period during which females attack recently burned trees. Then, we will determine the time of entry of whitespotted sawyer (Monochamus scutellatus) larvae into the wood of tree trunks and the rate at which they dig their tunnels in wood burned at various temperatures. 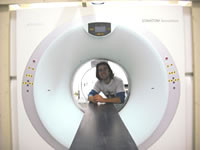 To do so, x-ray tomography will be used (in collaboration with the Institut national de la recherche scientifique) to scan longhorn beetle-infested logs in order to accurately monitor their development within the logs. By using a special software program, the digital images obtained will be reconfigured in 3D in order to monitor the development of tunnels dug by the larvae and thus predict their rate of progress in relation to temperature. 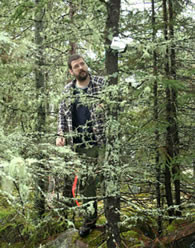 Since the early 1990s, hemlock looper, Lambdina fiscellaria (Guen.), has been the most common forest pest in Quebec. However, there is still very little documentation available on the biology and ecology of the hemlock looper. My work has demonstrated the existence of two types of population (ecotypes), which are characterized by a different number of larval stages, i.e., four or five stages. These fundamental differences have a significant impact on the biological performance of the various populations.

We have also observed a different spatial distribution in these two ecotypes. In my work, I am also seeking to demonstrate the impact of climate and forest species on the biological performance of these various hemlock looper ecotypes in order to better understand the dynamics of this species.