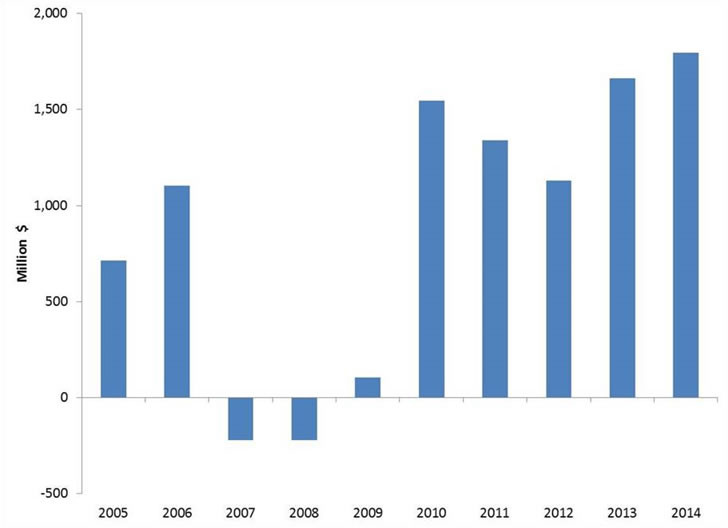 Most companies with major exposure to solid wood products continued to experience a strong momentum thanks to relatively balanced supply and demand, and generally favorable pricing supported by recovering U.S. and solid offshore demand. Total volume of Canadian softwood lumber (SWL) exports in 2014 was up about 5% from 2013. Volumes exported to the U.S. grew by 11% from 2013 offsetting the 5% decline of shipments to China, the first dip over the past 10 years. The Composite lumber benchmark prices strengthened sufficiently to eliminate any charges and restrictions under the Softwood Lumber Agreement (SLA) over the entire 2014 year. Taking advantage of the improving balance sheets, some Canadian companies have continued making strategic investments. In particular, acquisitions in the U.S. have seen the Canadian-owned share of US sawmilling capacity climb to 14% in 2014.

Financial performance of those companies with more exposure to pulp and paper products also significantly improved, mainly thanks to improved softwood pulp prices – in 2014 the average US dollar price for North American Northern Bleached Softwood Kraft (NBSK) pulp was up 9% compared to 2013. The value of NBSK exports rose 13% in 2014, despite almost unchanged shipped volumes thanks to the higher prices and the weakening Canadian dollar. Some Canadian companies also benefited from increased by-product and energy revenues.