This article is the fourth in a series of five which delve into the history of the forest sector in Canada from the 17th century until the 20th century (see also 1, 2, 3 and 5).

Paper industry: The pulp and paper industry really took off during 1891–1929. Aided by log export embargos in Ontario and Quebec that redirected fibre to domestic use from export to the US, the first sulfite pulp mill in Canada was established in Sheet Harbour, Nova Scotia in 1885. Mills began to be built where spruce was abundant, rail and water transport available, and the American market near.

New printing technologies also had a dramatic effect on the newspaper industry. By the 1880s the rotary press had evolved into a high speed machine and with the use of stereotyping allowed the production of large numbers of daily papers. The new techniques of making paper from wood fibre rather than from rags, which required great amount of energy, gave new value to the low-grade forest and abundant hydraulic power on the Canadian Shield, where the energy of free-flowing water was converted into mechanical power.

Another catalyst to the pulp and paper industry was the growing demand from the quickly increasing populations of Canada and the US combined with the removal of the US tariff on newsprint in 1913. In 1876 daily newspaper circulation in Canada’s nine major urban centres stood at 113,000 copies. By 1883 it had more than doubled. The growing populations stimulated large investments in Canadian pulp and papermaking, and set the course for an industry built on exports to the US that it has followed ever since. The annual capacity of Canadian mills dramatically rose from 715,000 tons in 1917 to 3,898,000 tons in 1930. In 1926, Canada’s newsprint production exceeded that of the U.S.

Regional shift and new investments: The mid 1890’s saw a protracted investment boom as untapped forest resources in the Canadian Shield and BC were increasingly accessed. US investors increasingly financed this, and as the 20th century proceeded, American ownership reached more and more into the resource sector, especially pulp mills.

Between 1898 and 1914, gross investment exceeded 15% of the GNP each year. A census report made by the Dominion Bureau of Statistics in the year 1918 showed this investment to have grown almost 400% since 1908. This explosion of investment meant that production vastly exceeded domestic requirements, and a thriving export trade ensued. Over this period, for every $100 invested, an increase of almost $50 was added to the country’s exportable wealth. Probably in no other staple industry will an investment of one hundred dollars perform an equivalent service to the country.

Trade: In 1890 Canada’s pulp and paper exports were valued at $122 but had increased to $1.8 million in 1900 and $163.1 million in 1920. By the end of WWI, Canada had already become the world’s largest exporter of pulp and paper. Ninety percent of Canadian newsprint production was exported, largely to American newspaper markets. 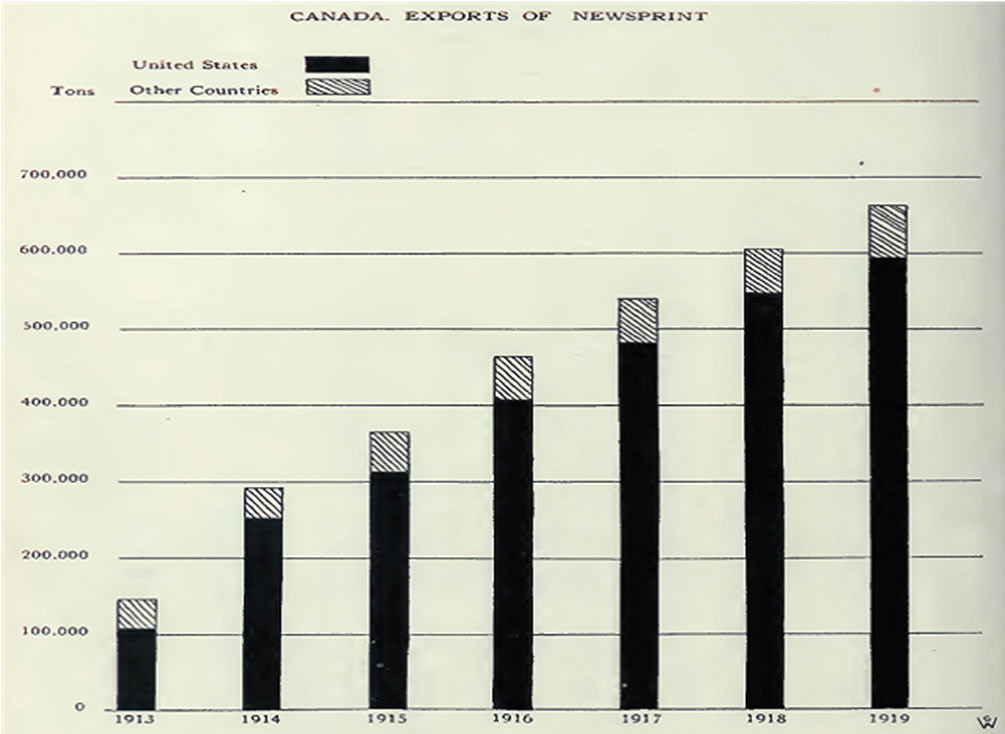 Source: Canadian Pulp and Paper Association, 1920. A handbook of the Canadian pulp and paper industry. Montreal.