This article is the first in a series of five which delve into the history of the forest sector in Canada from the 17th century until the 20th century (see also 2, 3, 4 and 5).

Wood has been at the core of Canadian economic development for centuries. Founded upon European demand, the timber trade brought investment and immigration to eastern Canada; it fostered economic development; and it transformed the regional environment far more radically than the earlier exploitation of fish and fur. It encouraged the building of towns and villages, the opening of roads, and exploration. It also contributed at times to economic instability. Business cycle swings produced wide fluctuations in the demand for, and the price of, wood; and weather conditions, commercial uncertainties and imperfect market intelligence magnified these difficulties. However, adapting to challenges as they emerged, wood-based industries were amongst the building blocks to Canada’s industrialization and its becoming a world economic power.

Shipbuilding: The use of wind and water as sources of power were major developments in the technological history of the new colonies. Ships with large masts and huge canvas sails maintained the link between the colonies and the imperial centres, Paris, France until 1769 and London, England until the arrival of steam power in 1850. The construction of these vessels was a remarkable feat in the nascent colonies of New France and British North America representing the dominant sector of the colonial manufacturing industry for a period of about 200 years.

While the fall of New France to the British in 1759 put a temporary end to these activities, the shift to British allegiance brought to Canada the markets of the British Empire and a rapid development of trade and industry. The British loss of the American colonies with their associated shipbuilding industry, the subsequent British loss of Baltic sources of timber, as well as Canada’s abundant supply of wood along with the tradition of shipbuilding established in New France made British North America an ideal location for a renewed shipbuilding industry. Québec City and Saint John, NB, both centres of timber export also became dominant centres for this activity not only in Canada but worldwide. The ships were intended for trade, mostly with Britain and were designed to favour hold rather than speed but events such as the Californian and Australian gold rushes (1848 and 1851) also fed the demand for Canada’s large ocean vessels. Large designs of between 500 and 1000 tons, well suited to the carriage of timber, were preferred.

Timber and lumber: By the beginning of the 19th century, sawn lumber and square timber were indeed the major wood exports. Waste was quite considerable: 25-30% of each tree was discarded. When Britain’s own sources of timber were exhausted, timber was imported from the Baltic region of northern Europe. When this source was cut off by French military action in the early 19th Century, the British government subsidized firms willing to develop North American timber resources and lumber camps sprung up in the forests of the Maritimes and central Canada. Under the stimulus of imperial preferences, white pine lumber became the chief export of the country. In 1805, 9000 loads of lumber (5,500 tons) arrived in Britain from Canada. In 1846, the total shipped rose to 750,000 loads (465,000 tons). St. John alone had 450 vessels in the timber trade in 1840.

Water was necessary for the transport of lumber to saw mill and ports as well as providing the power for the saw mills themselves and as a result the forest industry developed along the rivers of New Brunswick, Quebec and Ontario. 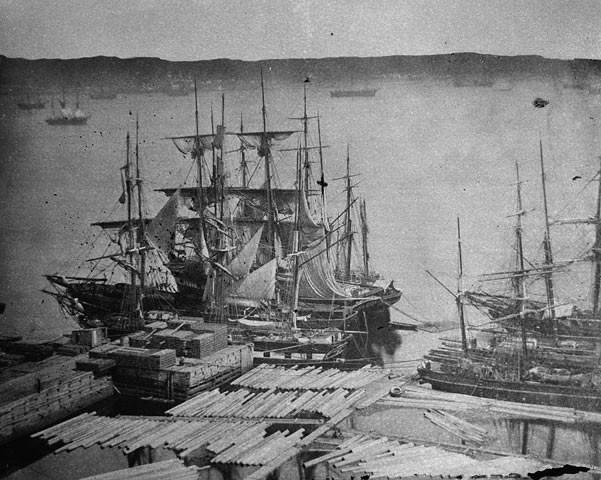 Paper industry: The paper industry started in the early 19th century as a domestic industry serving the gradually increasing needs of Canadians. Many new mills were established along the Great Lakes-St Lawrence system and its tributaries and in the Maritimes. Sites chosen for early mills were on rivers or streams, which provided the necessary water and power for the manufacturing processes but also a convenient means of transporting raw materials (linen and cotton rags at that point) and finished goods to markets.