We describe an individual-based model of spruce budworm moth migration founded on the premise that flight liftoff, altitude, and duration are constrained by the relationships between wing size, body weight, wingbeat frequency, and air temperature. We parameterized this model with observations from moths captured in traps or observed migrating under field conditions. We further documented the effects of prior defoliation on the size and weight (including fecundity) of migrating moths. Our simulations under idealized nocturnal conditions with a stable atmospheric boundary layer suggest that the ability of gravid female moths to migrate is conditional on the progression of egg-laying. The model also predicts that the altitude at which moths migrate varies with the temperature profile in the boundary layer and with time during the evening and night. Model results have implications for the degree to which long-distance dispersal by spruce budworm might influence population dynamics in locations distant from outbreak sources, including how atmospheric phenomena such as wind convergence might influence these processes. To simulate actual migration flights en masse, the proposed model will need to be linked to regional maps of insect populations, a phenology model, and weather model outputs of both large- and small-scale atmospheric conditions. 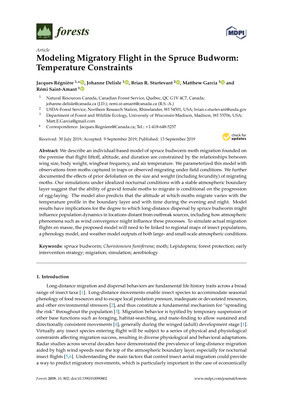