The resilience of closed-crown coniferous stands within the boreal forest of North America is highly dependent on successful re-establishment of tree species following fire. A shift from closed-crown forest to open lichen woodland is possible following poor natural regeneration during the initial establishment phase, followed by the development of extensive lichen cover, which may hinder ongoing recruitment. We examined the development of the crustose lichen Trapeliopsis granulosa (Hoffm.) 18 to 21 years following fire within six sites in the boreal forest of northwestern Quebec, and explored its potential to affect ongoing recruitment during early successional stages of stand development. Germination and survivorship trials were conducted within the laboratory to determine the establishment rate of Pinus banksiana Lamb. (jack pine) on T. granulosa, mineral soil, and burnt duff under two separate watering frequencies (observed and drought). Survival and establishment rates of jack pine were highest on burnt duff, and poor on both T. granulosa and mineral soil. Under the drought treatment, no seedlings survived on any substrates. In the field, T. granulosa cover had a positive relationship with mineral soil cover, and negative relationships with duff cover, ericaceous shrub cover, organic layer depth, other lichen cover, and Sphagnum moss cover. No discernable relationship was found between T. granulosa and tree density, rock cover, dead wood cover or other moss cover. The development of extensive T. granulosa cover in fire-initiated stands can impede ongoing recruitment of conifer species due to its poor seedbed quality, thereby maintaining open forests.

In this study, researchers observed that both the rate of survival and the rate at which jack pine becomes established were higher in burnt humus and lower in lichen-covered ground (Trapeliopsis granulosa) and in mineral soil. Furthermore, in conditions of a simulated drought, no seedlings survived, regardless of the type of substratum. The development of a vast T. granulosa lichen cover, fostered by drought conditions and openings in forest stands as a result of fire, may prevent stand succession of conifer species due to the low quality of the seedbeds, which results in forests remaining in an open state.

In order to carry out this study, the researchers examined the development of this lichen in six boreal forest sites located in northwestern Quebec from 18 to 21 years after fire. Tests of survival and establishment rates were performed in a laboratory setting. 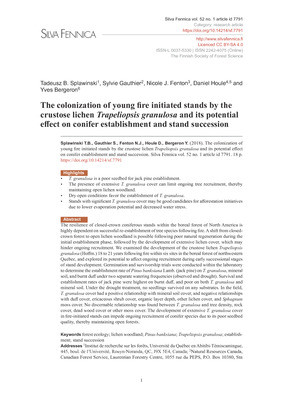