Populations are often exposed to multiple sources of gene flow, but accounts are lacking of the population genetic dynamics that result from these interactions or their effects on local evolution. Using a genomic clines framework applied to 1,195 single nucleotide polymorphisms, we documented genomewide, locus-specific patterns of introgression between Choristoneura occidentalis biennis spruce budworms and two ecologically divergent relatives, C. o. occidentalis and Choristoneura fumiferana, that it interacts with at alternate boundaries of its range. We observe contrasting hybrid indexes between the two hybrid zones, no overlap in “gene-flow outliers” (clines showing relatively extreme extents or rates of locus-specific introgression) and variable linkage disequilibrium among those outliers. At the same time, correlated genomewide rates of introgression between zones suggest the presence of processes common to both boundaries. These findings highlight the contrasting population genetic dynamics that can occur at separate frontiers of a single population, while also suggesting that shared patterns may frequently accompany cases of divergence-with-gene-flow that involve a lineage in common. Our results point to potentially complex evolutionary outcomes for populations experiencing multiple sources of gene flow.

The results of this study highlight the contrasting population genetic dynamics of a Choristoneura budworm species at the limits of its distribution range. This research confirms the existence of potentially complex evolutionary processes when the population of a given species is exposed to multiple sources of gene flow.

In this study, the researchers documented the exchange of genetic material between the Choristoneura occidentalis biennis spruce budworm and two ecologically divergent relatives, C. o. occidentalis and C. fumiferana, that it interacts with at the limits of its distribution range. 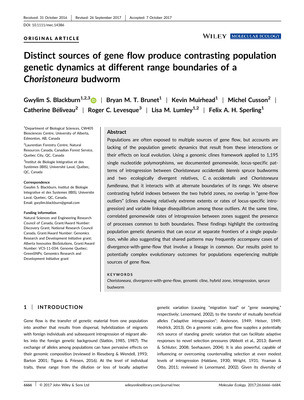