As the forestry landbase shrinks and demand for wood increases, improving productivity of commercial forest stands becomes more important. Because of its commercial value and common occurrence, lodgepole pine is a candidate for productivity improvement. Regenerating lodgepole pine forests are often characterized by very high density and slow growth, limiting their value. Therefore, a variety of precommercial thinning treatments have been tried at long-term installations, which provide valuable data to evaluate projections from existing growth and yield models. In this report, we evaluate the stand growth and yield from different thinning treatments in long-term silviculture installations in the Upper Foothills (Gregg Burn and Teepee Pole Creek) and Lower Foothills (MacKay) subregions of Alberta. The MacKay installation was established in 1954 with the objective of determining whether precommercial thinning of lodgepole pine could improve merchantable volume and quality at a young age, and in turn shorten rotation and increase annual allowable cuts. The Gregg Burn and Teepee Pole Creek installations were established in the 1960s to assess the response of tree and stand growth to different juvenile spacing treatments, with densities ranging from 500 to 8 000 stems per hectare. Tree growth and survival in these installations are measured periodically to evaluate the effect of different intensities of thinning on the growth and yield of the lodgepole pine crop trees. To provide a decadal update to previous measurements and evaluation, published in 2006, we examined total and merchantable volumes in these installations using the most recent data (2011–2014). Our analysis found that thinning is unlikely to increase yields; however, if thinning is carried out for other reasons, judicious choice of a thinning regime can avoid a yield loss. Thinning to 2 000–3 000 stems per hectare appears to be optimal, maximizing the positive effect on tree growth without major losses in volume.

Lodgepole pine is an important commercial tree harvested to produce timber in western Canada. But the land area where lodgepole pine grows is shrinking, and remaining stands of this tree are experiencing unprecedented attacks from mountain pine beetle. At the same time, the demand for wood is increasing. As a result, increasing the amount of useful timber that can be harvested from the remaining forest is becoming more important. Lodgepole pine forests are often very dense and slow growing, making it difficult to ensure tree harvesting is commercially viable. Thinning (limiting the number of trees in an area) can increase how fast the trees grow, resulting in larger logs at harvest, but also affecting the total amount of wood produced. Long-term studies have been conducted on several sites in the foothills of Alberta that had been established between 1954 and 1984 to determine whether thinning lodgepole pines early in their growth could increase the amount of useful timber on these sites. We found that thinning is unlikely to increase the amount of useable timber. However, if trees are thinned carefully for some other purpose (for example, control of mountain pine beetle or other pests), this may not cause the amount of timber to actually decrease. Thinning to 2,000–3,000 stems per hectare appears to provide the best compromise between, on the one hand, helping to increase the growth of each tree and, on the other hand, keeping enough trees in the stand to maintain large volumes of timber. 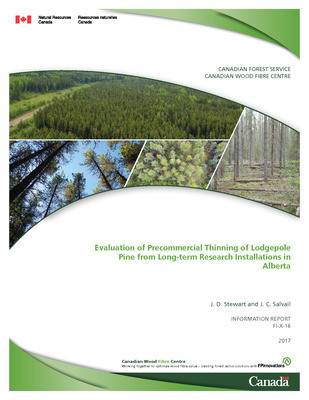