Diapause is a genetically programmed developmental arrest occurring in some insect species, that is accompanied by a major decline in metabolic activity. The diapause hormone (DH) has been shown to either induce or terminate diapause depending on the insect species. In a previous study we demonstrated that the DH from Clostera anastomosis (caDH) has biological activity in Helicoverpa armigera, which prompted us to examine the potential growth-inhibiting or antiherbivory effects of the TAT-caDH fusion protein when expressed in transgenic plants. In this study, we produced transgenic tobacco plants expressing either the TAT-caDH protein, or a TAT-caDH-eGFP fusion version that allows tracking of the fluorescent protein in plant tissues. Our results indicate that H. armigera larvae feeding on transgenic tobacco expressing TAT-caDH exhibited a significantly reduced survival rate and weight gain. However, larvae feeding on transgenic tobacco expressing TAT-caDH-eGFP were unaffected. While fusion of the eGFP gene influenced the bioactivity of caDH in larvae, TAT-caDH-eGFP can still penetrate the insect midgut cell membrane. TAT-caDH increases DH stability in oral delivery. Our results may help in targeting DH-dependent physiological processes in insects for improving herbivore tolerance in economically important crops. 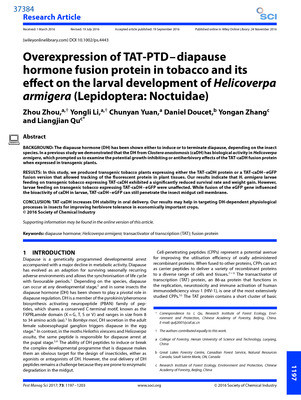