Identified as one of the top ten exotic pests that should be given priority at the Canadian Forest Service, the Asian gypsy moth poses a serious threat to forests, biodiversity and the economy in Canada. How can we make sure this insect is recognized upon its arrival in Canada?

This publication deals with the Asian gypsy moth, an insect whose presence has been detected on a number of occasions in Canadian ports, but which has yet to establish itself in Canada.

This insect has been identified as one of the top 10 exotic pests to be studied by the Canadian Forest Service. Its hosts include conifers (larch, pine and spruce) as well as hardwood trees (oak, poplar, willow, linden, birch, elm and apple trees).

Researchers at the Canadian Forest Service, Université Laval and the University of British Columbia have developed a molecular diagnostic test that differentiates the Asian gypsy moth from the European gypsy moths, and makes it possible to identify five other species of gypsy moths that pose a threat to Canadian forests. 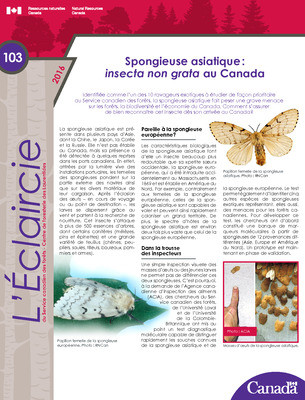