Fire regime characteristics in North America are expected to change over the next several decades as a result of anthropogenic climate change. Although some fire regime characteristics (e.g., area burned and fire season length) are relatively well-studied in the context of a changing climate, fire severity has received less attention. In this study, we used observed data from 1984 to 2012 for the western United States (US) to build a statistical model of fire severity as a function of climate. We then applied this model to several (n = 20) climate change projections representing mid-century (2040–2069) conditions under the RCP 8.5 scenario. Model predictions suggest widespread reduction in fire severity for large portions of the western US. However, our model implicitly incorporates climate-induced changes in vegetation type, fuel load, and fire frequency. As such, our predictions are best interpreted as a potential reduction in fire severity, a potential that may not be realized due human-induced disequilibrium between plant communities and climate. Consequently, to realize the reductions in fire severity predicted in this study, land managers in the western US could facilitate the transition of plant communities towards a state of equilibrium with the emerging climate through means such as active restoration treatments (e.g., mechanical thinning and prescribed fire) and passive restoration strategies like managed natural fire (under suitable weather conditions). Resisting changes in vegetation composition and fuel load via activities such as aggressive fire suppression will amplify disequilibrium conditions and will likely result in increased fire severity in future decades because fuel loads will increase as the climate warms and fire danger becomes more extreme. The results of our study provide insights to the pros and cons of resisting or facilitating change in vegetation composition and fuel load in the context of a changing climate.

Wildfires are expected to change because of climate change. This study looked at fire severity; that is, how drastically the fire alters soils and vegetation, measured a year after the fire. It used statistical models to understand the relationship between fire severity and climate for the entire western US in a recent 28-year period of normal climate and then predicted what would happen in 2040–2069 based on global climate models. It found that fire severity decreases if there is a water deficit and increases when there is more precipitation (snow and rain). Cooler and wetter forest ecoregions experience more severe fires. The study predicts that fires will become less severe over much of the western US, as the climate becomes not only warmer but drier. Forests are expected to regenerate after fire with fewer trees that do not grow as well, and therefore have less biomass to burn. This prediction may change if humans change natural balances through expanding livestock grazing, breaking up the landscape with roads and other development, and suppressing wildfires. In fact, preventing and fighting fires today might result in more severe fires in the future, as many forests have not had recent fires and will have a lot of fuel when fire inevitably comes. 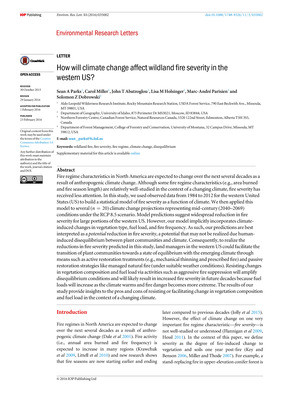