Polydnaviruses form a group of unconventional dsDNA viruses transmitted by endoparasitic wasps during egg laying into caterpillar hosts, where viral gene expression is essential to immature wasp survival. A copy of the viral genome is present in wasp chromosomes, thus ensuring vertical transmission. Polydnaviruses comprise two taxa, Bracovirus and Ichnovirus, shown to have distinct viral ancestors whose genomes were “captured” by ancestral wasps. While evidence indicates bracoviruses derive from a nudivirus ancestor, the identity of the ichnovirus progenitor remains unknown. In addition, ichnoviruses are found in two ichneumonid wasp subfamilies, Campopleginae and Banchinae, where they constitute morphologically and genomically different virus types. To address the question of whether these two ichnovirus subgroups have distinct ancestors, we used genomic, proteomic and transcriptomic analyses to characterize particle proteins of the banchine Glypta fumiferanae ichnovirus and the genes encoding them. Several proteins were found to be homologous to those identified earlier for campoplegine ichnoviruses while the corresponding genes were located in clusters of the wasp genome similar of those observed previously in a campoplegine wasp. However, for the first time in a polydnavirus system, these clusters also revealed sequences encoding enzymes presumed to form the replicative machinery of the progenitor virus and observed to be overexpressed in the virogenic tissue. Homology searches pointed to nucleocytoplasmic large DNA viruses as the likely source of these genes. These data, along with an analysis of the chromosomal form of five viral genome segments, provide clear evidence for the relatedness of the banchine and campoplegine ichnovirus ancestors.

Importance Recent work indicates that the two recognized polydnavirus taxa, Bracovirus and Ichnovirus, are derived from distinct viruses whose genomes integrated into the genomes of ancestral wasps. However, the identity of the ichnovirus ancestor is unknown and questions remain regarding the possibility that the two described ichnovirus subgroups, banchine and campoplegine ichnoviruses, have distinct origins. Our study provides unequivocal evidence that these two ichnovirus types are derived from related viral progenitors. This suggests that morphological and genomic differences observed between the ichnovirus lineages, including features unique to banchine ichnovirus genome segments, result from evolutionary divergence either before or after their endogenization. Strikingly, analysis of selected wasp genomic regions revealed genes presumed to be part of the replicative machinery of the progenitor virus, shedding new light on the likely identity of this virus. Finally, these genes could well play a role in ichnovirus replication as they were overexpressed in the virogenic tissue.

This study showed that viruses transmitted to the spruce budworm (SBW) by two tiny parasitic wasps, a campopleginae and a banchinae, have a common origin despite their numerous distinguishing characteristics.

These viruses play an important role in disturbing the immune response of the SBW, which facilitates the development of the parasitic wasps’ larvae. These viruses are the focus of work aimed at developing new methods of controlling the SWB. 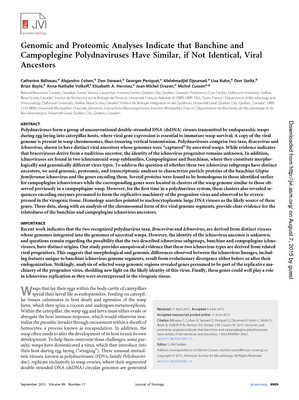