Plant species mixtures are often seen as being able to achieve higher productivity and carbon (C) sequestration than their single-species counterparts, but it is unclear whether this is true in natural forests. Here, we investigated whether naturally-regenerated mixtures of common North American boreal tree species were more productive and stored more C than single-species stands. We also examined how closely the different C pools and fluxes were interrelated and whether these relationships varied with species composition. Single- and mixed-species stands of trembling aspen, black spruce and jack pine on mesic sites were selected in two regions of the Canadian boreal forest to assess aboveground and belowground productivity and C storage. Although previous studies conducted in these stands found synergistic effects of tree species mixtures on specific C pools and fluxes, such as higher organic layer C stocks and higher fine root productivity in some mixtures, no effects were detected on combined C pools or fluxes at the ecosystem level in the current study. Aspen abundance was linked with higher aboveground tree productivity, higher aboveground living biomass and higher soil heterotrophic respiration, indicating that aspen acts as a key driver of ecosystem C storage and fluxes in these natural forest ecosystems, more so than species richness. However, our results do not rule out the possibility of increased productivity and C storage in mixed stands under environmental conditions or stand developmental stages that are different from the ones studied here. Furthermore, when the entire forest ecosystem is considered (not only tree parts), synergistic effects of tree species mixtures may be more difficult to observe because the beneficial effect of species mixing on one specific C pool may be counterbalanced by a negative effect on another pool.

In light of this study, the researchers conclude that a mix of softwood and hardwood species in the stands has no effect at the ecosystem level on the quantity of carbon that is stored in it. However, it impacts certain elements of the ecosystem such as the soils, trees or understory plants when they are considered independently. Moreover, this study shows that it is not the mix of a stand, but rather the abundance of one species in particular, trembling aspen, that positively influences carbon storage.

This study took place in the Canadian boreal forest, in stands composed of poplar, black spruce and jack pine, at varying degrees. 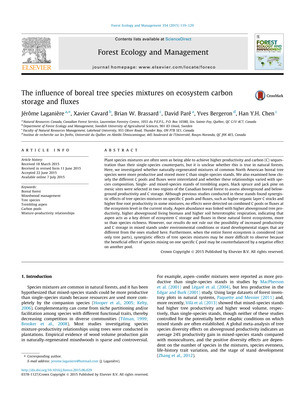