Genetic means for height growth differed between intra- and inter-provenance crosses, which we hypothesized was due partly to unidentified relatedness among intra-provenance base parents resulting in mild inbreeding and inbreeding depression among their offspring. A dense array of 5,844 single nucleotide polymorphisms was used to directly construct a genomic relationship matrix (G) that had four elements ranging from 0.17 to 0.24, between five intra-provenance base parents. Adjusting the numerator relationship matrix for this relatedness among base parents produced inbreeding coefficients of Fi ≈ 0.1 in their offspring, which displayed depressed height growth. Accounting for inbreeding level as a covariate in a mixed model decreased grossly overestimated (up to 2×) dominance variance in models without the covariate adjustment. Height growth decreased 39 cm (∼ 6 %) for every 0.1 increase in Fi.

White spruce is a highly sought-after species by the forest industry and it is one of the most planted species, particularly in Quebec. It is the subject of a great deal of genetic enhancement work.

In this study, researchers wanted to know if the descendants of related white spruce trees grew less quickly than the progeny of non-related trees. Bi-parental descendants of trees from a single source and from various sources were generated through controlled crosses in the 1990s. The risk of inbreeding is obviously higher when the parents come from the same source. In order to estimate the degree of inbreeding between trees, researchers used more than 5000 genetic markers. Their results showed that there is indeed inbreeding between certain trees from the same source and that the height of their descendants after 15 years of growth was 6% lower than that of trees with non-related parents.

These results demonstrate the importance of making sure that the trees comprising a managed plantation for the rapid and abundant production of improved seeds (tree seed orchard) are not related or are distant relatives (at the very least descendants of two cousins). 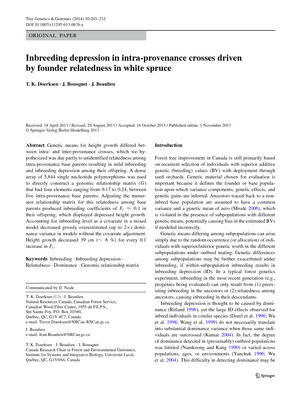