White spruce (Picea glauca [Moench] Voss) seedlings produced by somatic embryogenesis were grown both at the Kennedy Space Center and in weightlessness in the ISS for 30 days. Plants were placed in closed environment incubators (Advanced Biological Research System) under controlled light, temperature, humidity and CO2 conditions. At the end of the experiment, the leading shoot from three plantlets of each of the three lines tested were sampled and pooled in Kennedy Space Center Fixation Tubes (KFT) containing a RNA stabilization solution. Transcript levels were determined by quantitative real-time polymerase chain reaction (RT-qPCR) for 27 candidate genes and three reference genes on the nine seedlings grown in each environment. About two-thirds of the 27 genes produced a larger number of transcript molecules in microgravity conditions. However, only three genes showed significant differences between the two environments, and all of them were up-regulated in microgravity. These genes appear to be involved in important processes such as cell propagation, plant development and response to stress, and their up-regulation has likely contributed to influencing seedling growth patterns.

White spruce is an important species in the forest industry and its genetics are well known. This makes it an ideal candidate for testing the effect of gravity on its development.

Thus, in 2010, white spruce seedlings spent 30 days aboard the International Space Station, and their growth was compared to that of similar seedlings that remained on Earth.

The researchers noted "normal" growth in both cases (on Earth and in space), but there were differences in gene expression, i.e. in the way the information contained in a gene is decoded. This affects the functioning and development of cells, which could have an effect on wood formation. 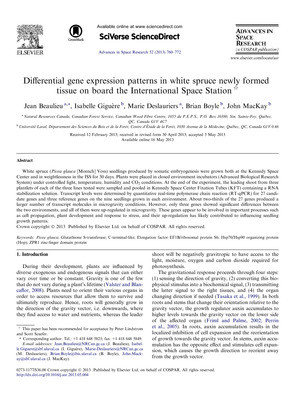