Aiming to determine if there is genetic differentiation among Pinus patula Schiede et Chamizo populations along an altitudinal gradient and for quantifying the genotype x environment interaction, 13 Pinus patula populations were sampled from forests of the Native Indian Community of Ixtlán de Juárez, Oaxaca, state of México, along an altitudinal gradient (2400 m to 3000 m), cones being collected on groups of trees on every 50 m of altitudinal step). Seedlings were grown in tree pots in two different environments: a shadehouse located at Ixtlán de Juárez, and in a greenhouse and then in a shadehouse situated at Quebec, Canada. Total seedling height was measured at 6-months of age in both locations. Results indicated that populations differed significantly (P = 0.025), but there was no significant genotype x environment interaction (P = 0.426; B type genetic correlation = 0.93). Population from 2650 m (middle altitude) exhibited the best height. Although not definitive, our study suggests the presence of a weak altitudinal pattern of variation in seedling height, where populations originating of mid-altitudes exhibit the highest growth potential while populations from the upper and lower altitudinal extremes exhibit the lowest growth potential. 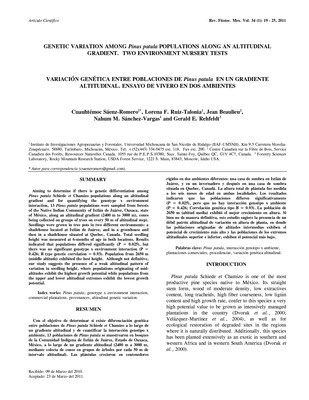