In 2007, a multi-year connectivity modelling experiment was initiated to better understand the movement potential of mountain pine beetle (MPB) in Alberta and Saskatchewan pine forests. In the first year, spatial models of highly susceptible pine forest connectivity were developed for Alberta and Saskatchewan. The following year, the study focused solely on Alberta pine forests as our investigation turned to examine the effect that different pine species have on the connectivity model. In the third year (2009-10), the influence of climate on the landscape connectivity in Alberta was explored. To investigate the impacts of possible climate changes, minimum planar graphs were developed for the Alberta pine forests based on a modified stand susceptibility index. It was found that the stand susceptibility index most closely reflected observed MPB spread patterns when there were no climatic limitations in the model. A preliminary verification of the connectivity model was also performed. Using the model to determine expected 2009 MPB locations based on observed 2008 MPB source locations, both visual and statistical comparisons were performed to determine how well the model matched observed MPB spread. Generally, MPB were preferentially selecting closely connected habitat, but some of the direction of spread did not follow expected patterns. Some factor other than habitat connectivity (such as wind direction during MPB flight or topography) was influencing MPB spread: this warrants further exploration. 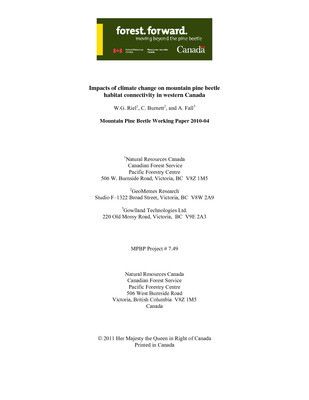