Mountain Pine Beetle (MPB) recently breached the Continental Divide and invaded northern Alberta. While the region is only marginally climatically suitable for the MPB (see review in Nealis and Peter 2008), populations could increase in the short term, given successive years of favourable weather. In addition, if the beetle is able to establish itself in the region and persist, even at very low (endemic) population levels, there is the potential for future eruptions with climate change (Safranyik et al. 2010). This study investigated the endemic niche for MPB in north-western Alberta at two sites. Our results indicate that an endemic niche for the MPB likely exists at the two sites that we sampled in the region based on the availability of susceptible trees and the assemblage of secondary bark beetles, which may impact endemic MPB populations (Carroll et al. 2006a; Smith et al. 2011). Over one-third of pine trees greater than 10 cm in diameter at both sites had at least two putative vigour-impairing injuries. Endemic-type attacks were located on trees in both stands and the number of trees with endemic-type attacks remained relatively consistent between years at one site. Ten of the 12 trees we located with endemic-type MPB attacks were already colonized by secondary bark beetles. The number of trees attacked by secondary bark beetles ranged from three to eight trees per hectare. The assemblage of secondary bark beetles colonizing the lower boles of trees consisted of eight species in northern Alberta, with trees most frequently attacked by Orthotomicus latidens, Dendroctonus murrayanae and Hylurgops spp. After the 2006 immigration event, beetle populations at our sites in northern Alberta declined in 2007 and 2008, with a reduction in the number of mass-attacked trees and an estimated population decrease of 44%. The explosive 420% population increase at one site in 2009 far exceeded our estimate of production by the in situ 2008 population and was likely the result of another major long-distance dispersal event that purportedly occurred in the region. During our study we observed great variation in MPB attack behaviour (e.g., annual attack), phenology (e.g., early adult emergence, multiple cohorts), and overwintering survival within and among stands. There are apparent geographic differences in MPB attack dynamics and reproductive success that may result in unexpected local and regional population dynamics (Clark et al. 2010; Cudmore et al. 2010). Future research should focus on understanding MPB biology and population dynamics in its expanded range under changing environmental conditions because this knowledge is critical for assessing the threat to our boreal forest resources and for developing effective management strategies for the region. 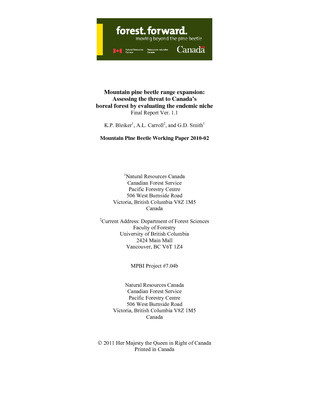