An age-structured population model is used as a vehicle for presenting a method for the analysis of interactions between pairs of insect pest control methods. This analysis is based on partitioning the total mortality acting on a population into its constituent components from all known sources. Pairwise critical mortality curves are then constructed which represent the combined mortality required for eradicating the pest population. Effort curves are then constructed from computing the mortality resulting from a given amount of control effort. The convolution of the critical mortality curves and the effort curves then yields the isoclines formed by the effort required of two control methods in combination to achieve eradication. This analysis allows the prediction of either synergism or interference between the control methods and also helps explain patterns observed in previous modelling of such combinations of pest control methods. 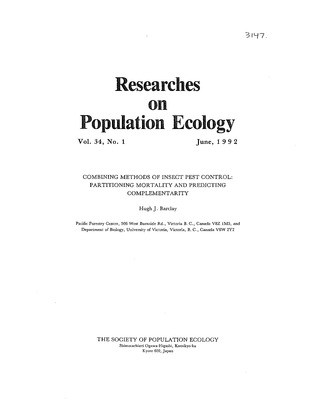