The province of British Columbia, Canada is currently experiencing the largest mountain pine beetle outbreak ever recorded in North America. Widespread mortality of pine trees has occurred in over 14.5 million ha of forest (an area roughly twice the size of Ireland) and the outbreak continues to kill mature pine in the province. Although the beetle attacks all pine species native to British Columbia forests, lodgepole pine is the most abundant species by area and the most predominant commercial species. Consequently, an aggressive program of salvage harvesting has been initiated and is now superimposed on an already-severe landscape-level disturbance. The epicenter of the current outbreak is in the Fraser River Basin (230 000 km2), where roughly 8 million ha of forest, approximately 35% of the drainage area, have been affected. The Fraser River is one of the most productive salmon rivers in the world; its lakes and tributaries provide spawning habitat for all five species of Pacific salmon and more than 100 other species of fish. The basin is also home to 63% of British Columbia's population, with many people living close to or within the broad floodplain in the Lower Mainland. Approximately 62 000 ha of agricultural, residential and commercial land within this floodplain are protected behind 320 km of dikes built along the river. In snow-dominated areas, such as British Columbia's interior, the loss of forest cover due to pine death and salvage harvesting results in higher snow accumulation over the winter and higher melt rates during the spring. This effect, combined with a loss of transpiration (i.e., dead trees do not extract moisture from the soil), generally results in more water available for local runoff. This leads to potential increases in magnitude and frequency of peak-discharge events. Changes in the peak flow can translate directly to increased flood risk and negative impacts on fisheries and aquatic ecosystems. Due to the massive size of the affected area, potential exists for widespread and significant peak-flow changes throughout the basin. The purpose of this project was to assess the potential for impacts and changes to the peak-flow regime throughout various sub-basins of the Fraser River watershed. The vast size and the physical complexity of the Fraser River Basin make it extremely difficult to directly measure the hydrologic effects of beetle kill and salvage harvesting. As a result, a hydrology model has been used to assess the hydrologic consequences of the current outbreak. The model was used to examine streamflow impacts for 60 sub-basins within the Fraser River Basin. The sub-basins ranged in size from 400 km2 to 217 000 km2. Peak-flow impacts were projected as a function of change in forest cover representing mountain pine beetle mortality and various levels of subsequent salvage of pine-forested areas within each of the sub-basins. The simulation results indicate: o Forest disturbance tends to increase peak-flow magnitudes, with relative change in magnitude increasing with disturbance severity. 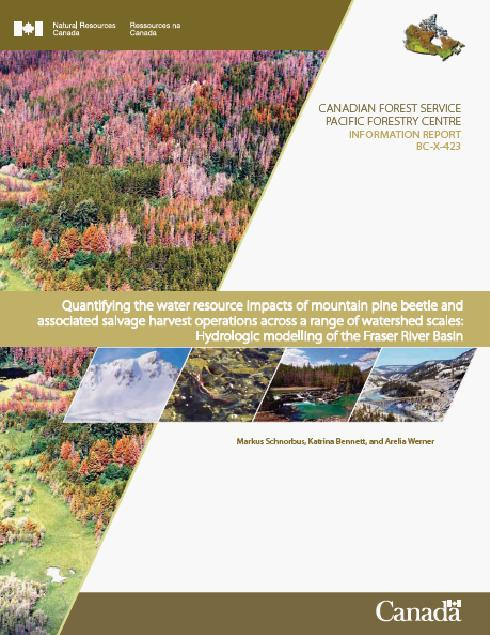