Jack pine (Pinus banksiana Lamb.) is a broadly distributed North American conifer and its current range was covered by the Laurentian ice sheet during the last glacial maximum. To infer about the history and postglacial colonization of this boreal species, range-wide genetic variation was assessed using a new and highly variable minisatellite-like marker of the mitochondrial genome. Among the 543 trees analysed, 14 distinct haplotypes were detected, which corresponded to different repeat numbers of the 32-nucleotide minisatellite-like motif. Several haplotypes were rare with limited distribution, suggesting recent mutation events during the Holocene. At the population level, an average of 2.6 haplotypes and a mean haplotype diversity (H) of 0.328 were estimated. Population subdivision of genetic diversity was quite high with GST and RST values of 0.569 and 0.472, respectively. Spatial analyses identified three relatively homogeneous groups of populations presumably representative of genetically distinct glacial populations, one west and one east of the Appalachian Mountains in the United States and a third one presumably on the unglaciated northeastern coastal area in Canada. These results indicate the significant role of the northern part of the US Appalachian Mountains as a factor of vicariance during the ice age. A fourth distinct group of populations was observed in central Québec where the continental glacier retreated last. It included populations harbouring hapolotypes present into the three previous groups, and it had higher level of haplotype diversity per population (H = 0.548) and lower population differentiation (GST = 0.265), which indicates a zone of suture or secondary contact between the migration fronts of the three glacial populations. Introgression from Pinus contorta Dougl. var. latifolia Engelm. was apparent in one western population from Alberta. Altogether, these results indicate that the mitochondrial DNA variation of jack pine is geographically highly structured and it correlates well with large-scale patterns emerging from recent phylogeographical studies of other tree boreal species in North America. 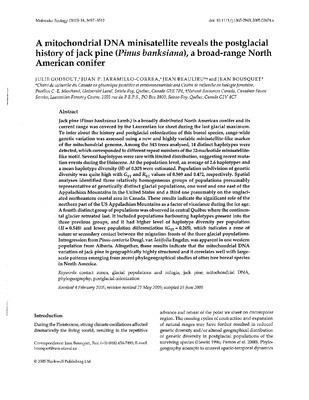