There is an emerging agreement that sustainable forest management strategies should be based on a good understanding and knowledge of disturbance regime and forest dynamics. In this context we have undertaken a study on the fire history and forest dynamics in the Lake Abitibi Model Forest (LAMF). First, using air photographs, archives documents, and filed sampling, we made a time since fire map for the entire LAMF. This map allowed us to compute the stand age class distribution, the size distribution of stands, the forest composition in each age class and the fire cycle for different time periods. Our results indicate that large parts of the LAMF have not burned for long time periods, suggesting that in the area, fire are large and that fire intervals at the same location are long. In the last 300 years, the fire cycle length has significantly increased from less than a 100 years before 1850 to more than 400 years after 1920. Stands that have not burned since more than 100 years represents 78% of the studied area, including 31% that have not burned for more than 200 years and 13% for more than 250 years. The jack pine, poplar and white birch working group (WG) occupies larger areas in sites that have burned within the last 100 years than in the older sites whereas the WG of black spruce and balsam fir increase in importance in sites older than 100 years. The same trends are observed at the species level within each WG. The mean stand age (mean time since fire) is 172 years, implying that the global fire cycle is longer than the usual rotation of the studied area. The difference between the natural age class distribution and the one under an even aged management system is important as on one hand it implies the lost of old forest often considered a key landscape elements for the maintenance of biodiversity, or on the other hand a decrease in allowable cuts due to an elongation of rotation if the natural age class distribution is maintained. We suggest that, by varying treatments and by developing forest practices that are aimed at conserving certain structural characteristics of older stands, we can reconcile these two different aspects. To this end, some new practices such as HARP that are currently tested in the LAMF are promising. 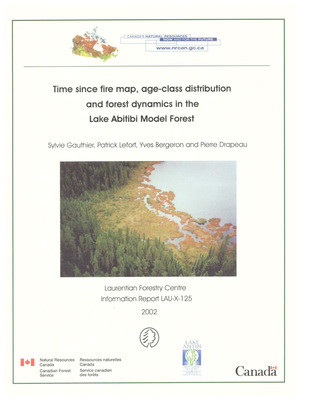