Methods for collecting and rearing parasitoids of larvae and pupae of Pissodes species are discussed. Illustrated keys are provided for the identification of 31 species of Diptera and Hymenoptera, which are parasitoids, hyperparasitoids, and scavengers associated with Pissodes species. Twenty-six of these species are known to occur in Canada, and another 6 are widespread in the United States and probably occur in Canada. A list is provided of 33 other species which have been recorded as associates of Pissodes species, but whose records are suspect and have not been confirmed. A brief discussion of the biology and abundance of each species, which is included in the key, is given. A glossary is given. 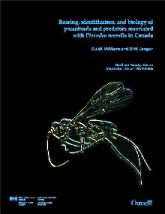