Analysis and use of historical patterns of spruce budworm defoliation to forecast outbreak patterns in Quebec. 2000. Gray, D.R.; Régnière, J.; Boulet, B. Forest Ecology and Management 127: 217-231.

Historical records of defoliation by spruce budworm in Quebec from 1965 to 1992 were analyzed to determine the degree of variability in the spatial and temporal patterns of defoliation. Approximately 80% of the provincial variation in the 28-year record could be described by 25 representative defoliation patterns after first removing the geographic trends in onset year of outbreak. The spatial distribution and probable host impact of these geo-referenced representative defoliation patterns are discussed. These patterns can be used in the context of forest protection and resource management decision-making, especially if they are incorporated into a decision support system with a geo-referenced database of stand characteristics and a stand growth model. Such a system can improve estimates of expected losses due to defoliation by spruce budworm and of the potential benefits of foliage protection. The spatial and temporal patterns of defoliation can be used also to investigate the influence of environmental conditions on the characteristics of budworm outbreaks. They also constitute a basis for the validation of spatial patterns predicted by epidemiological models of the insect's population dynamics. 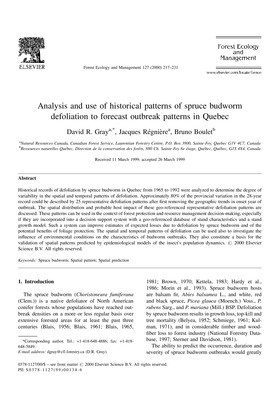