Predatory activity of Formica lugubris was studied from May through August 1976, to determine the variety of prey collected and the relative abundance of different groups of prey throughout the season. Prey consisted entirely of invertebrates, more than 95% being insects. Lepidoptera, especially Tortricidae, accounted for the major portion of prey during the sampling period. Using comparative rates of day and night predation it was estimated that a large number of spruce budworm were removed from the population by ant predators. It was also observed that prevailing weather conditions had a marked effect on predatory activity. 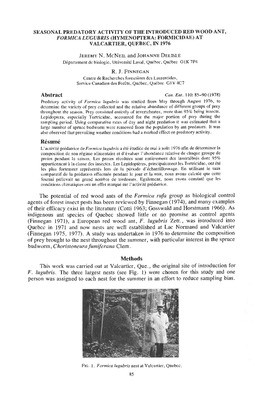