The carbon accounting team, in collaboration with the EOSD forest cover and change-detection projects, is currently developing a prototype spatially explicit framework for the accounting of forest carbon stocks. The site for the pilot project is the area around the northern British Columbia city of Prince George. The predominant land use is forestry; however, the region also contains extensive areas of agricultural, urban, and rural residential land use, making it a useful area for development and testing of land-use change mapping methods. 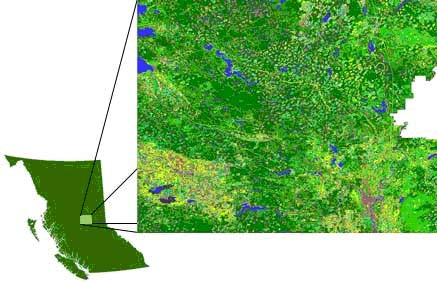 Landsat imagery from 1990 (Figure 1) and 1999 is interpreted according to the base deforestation interpretation method. In addition, this pilot project includes the interpretation and mapping of active forest-harvesting activities which affect carbon stocks and are included in the accounting of forest management activities. Harvest is not a deforestation event unless it is followed by a change in land use, such as conversion to agriculture. Techniques to improve the efficiency of the interpretation and mapping process will be developed, tested, and refined.