For over 15 years, the EcoDIF laboratory research program under Christian Hébert's supervision has focused on the ecology of communities: Use of insects as an indicator of the state of forests. The research areas included are: 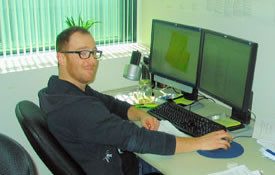 Analysis of the impact of various degrees of
fire-damaged wood salvaging on insect diversity.

The lack of a standard for harvesting fire-damaged forests is a shortcoming in Quebec's RNI that could compromise the sustainable management of forests, including the maintenance of biodiversity. The main objective of the project is to determine the degree of fire-damaged wood salvaging that is compatible with maintaining the diversity of insects dependent on this habitat at a landscape scale. 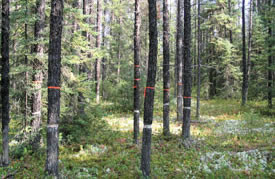 Research in burned areas in the Chibougamau
region.

The experimental design consists of four areas burned by fire in 2005 in the Chibougamau region and includes 50 impact traps dispersed over a gradient of fire-damaged wood salvaging levels in a landscape ranging from jack pine to black spruce. Impact traps were also installed in unburned stands within which clusters of 11 trees were girdled in order to simulate a natural disturbance regime with gaps. After three seasons of trapping (2006, 2007 and 2008), the beetles in families associated with the burned areas will be identified. In addition, logs from the girdled tree sites and fire-damaged sites were raised in order to identify species associated with this type of micro-habitat. The degree of fire-damaged wood salvaging on each site will be assessed according to two spatial scales using ArcMap 9.2. 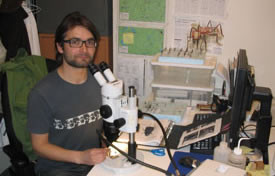 Analysis of the effects of various silvicultural
scenarios on insect diversity.

Given the increasing use of ecosystem-based forest management in forest, it is necessary to assess various ecological attributes, particularly the volume of dead wood. These woody debris are vital to saproxylic beetles and ants that participate, along with saprophytio fungi, in the recycling and decomposition of organic material.

In addition, the balsam fir-white birch domain is an ecosystem that, when infested with spruce budworm, has large quantities of woody debris. This presence of dead wood at every stage of degradation is a characteristic of natural forests that increases the diversity of ecological niches. 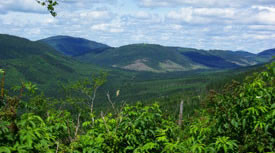 The overall objective of the project is to assess whether or not the various silvicultural scenarios used in this ecosystem following the most recent spruce budworm (SBW) outbreak 20 years ago maintain this natural variability in dead wood and whether or not they help maintain insect diversity so as to be included in an ecosystem-based management approach. 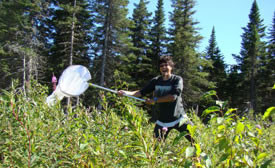 An experimental design consisting of enclosures and exclosures with deer densities of 0, 7.5 and 15 deer/km2 and a natural density site are used to compare the impact of deer density on insect populations. These impacts are related to the pressure of browsing on the vegetation and are assessed by observing the abundance and species diversity of four insect guilds: phytophagous insects (Macrolepidoptera and Hemiptera), phytophagous predators (Cantharidae), pollinizers (Apoidea and Syrphidae) and epigeal insects (Carabidae).

The insects were collected in pitfall light traps, flight intercept light traps (placed 3 m above the ground) and Malaise traps. We will also check whether plant-insect relationships are disturbed by deer density by capturing all of the dogwood, willow-herb and thistle pollinizers during observation sessions. 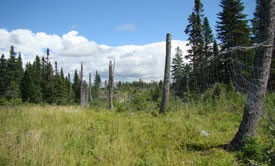 Experimental design.
Raspberry, willow-herb and thistle plants are also gathered in order to collect all the arthropods found on them. The insects are then identified at the species level so that detailed comparisons can be made between communities subjected to various deer densities. 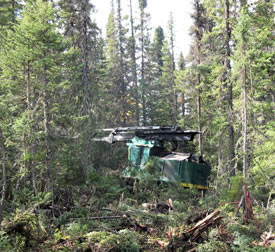 The North Shore boreal forest consists mainly of spruce-moss stands characterized by an irregular structure, an abundance of snags, woody debris on the ground, and the large presence of balsam fir. The wet climate of this region reduces the frequency of fires in such a way that forest dynamics are controlled by secondary disturbances and natural tree mortality. Consequently, the area has a heterogeneity that is increased by silvicultural practices.

The objective of the project, which is part of the Université Laval Industrial Research Chair in Silviculture and Wildlife program, is to determine silvicultural treatments that help maintain the ecological attributes and functions of this irregular forest. The specific objective of our work is to determine the impact of four silvicultural treatments (harvest with regeneration protection [HARP], cutting with protection of small merchantable trees [CPSMT] and two types of partial cutting) on the diversity and abundance of beetles in the boreal forest. A combination of 320 pitfall traps and 80 impact traps were installed in a four-block experimental design. 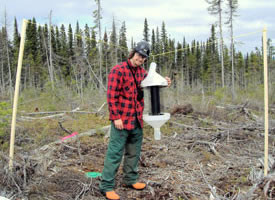 Insect traps in the research areas.

A sample of 27,000 beetles was gathered between June 5 and August 22, 2007. a total of 410 species of beetles falling into 53 distinct families were identified. Several of the collected species responded strongly to changes in their environment following silvicultural activities such as opening of the canopy, increased amounts of woody debris on the forest floor and standing woody debris, and the creation of transition areas. This project is consistent with a sustainable development perspective in which the conservation of biological diversity is a key element. By demonstrating the impact that various silvicultural practices may have on biological diversity, there is a potential to show forest industry stakeholders that informed and innovative choices can be made to develop a sustainable forest industry. The project is part of the Université Laval NSERC Industrial Research Chair in Silviculture and Wildlife, which includes many studies in which different experimental design variables (regeneration, woody debris, wildlife, etc.) are analysed in order to eventually combine all of the collected information into a single data matrix that can be used for the purposes of a major study.

Use of prescribed burns for white pine (Pinus strobus L.) regeneration in the La Mauricie National Park of Canada: Effects on beetle communities 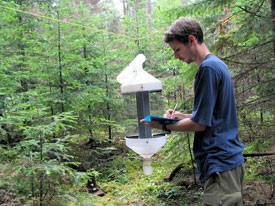 For over 10 years, La Mauricie National Park of Canada (LMNPC) managers have been conducting prescribed burn operations to restore white pine (Pinus strobus L.) stands that were significantly altered by logging. More recently, the systematic suppression of forest fires has been even more harmful to the renewal of this species.

The problems of residual forests of white pine in the LMNPC are nowadays such that their ecological trajectory is significantly modified, which makes them vulnerable. Since 1991, Parks Canada experts have been conducting prescribed burns in some areas of the park. A sampling design was established on 16 sites, seven of which having burned and the other nine being unburned control sites. 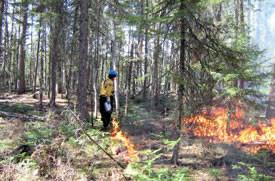 The problems of residual forests of white pine in the LMNPC are nowadays such that their ecological trajectory is significantly modified, which makes them vulnerable. Since 1991, Parks Canada experts have been conducting prescribed burns in some areas of the park. A sampling design was established on 16 sites, seven of which having burned and the other nine being unburned control sites.

Prescribed burns therefore make it possible to add portions of burned forest to a forest mosaic subject to fire suppression and constitute a very useful practice not only for restoring white pine stands but also for maintaining the biodiversity associated with these stands.

Woody debris in the boreal forest.

Forest fires are the biggest natural disturbance in Canada's boreal forest, destroying on average 2.8 million hectares of forest every year. This type of disturbance is a major source of woody debris in boreal forest environments, which are a vitally important habitat for a huge diversity of insects, including "saproxylic" insects, which are associated more or less closely with dead wood.

The project's first objective is to gather information on saproxylic beetles and the factors that control their colonization burned areas in the same year that a fire occurs in the boreal forest. More specifically, we want to assess the importance of potential colonization sources (recent dead wood, unburned stands and recent fires) and the impact of local factors specific to the burned site on colonization by adult insects, and especially by the larvae of xylophagus insects.

We will also study the spatial pattern of colonization by these insects to determine the cause and understand how underlying mechanisms vary according to time since fire. We are also interested in the factors controlling the rates of decomposition of burned trees and those affecting colonization by certain polypore species following fire. 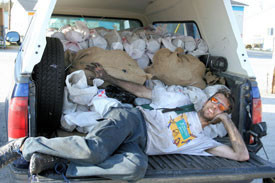