Insects harbour a wide variety of diseases. This project has been investigating microorganisms that cause disease in forest insects since the early 1950s when the Laboratory for Insect Pathology was established in Sault Ste. Marie. The Laboratory was mandated to find pathogens that could be used to combat forest insects as an alternative to broad-spectrum synthetic insecticides, which were proving to be harmful to the environment. It later became the Insect Pathology Research Institute, and is now part of the Great Lakes Forestry Centre. Over the years, Sault Ste. Marie researchers described and investigated many pathogens attacking forest insects, including viruses, fungi, bacteria and microsporidia. Only a few of those were suitable for development as insect control agents. For the past 25 years, studies on baculoviruses and B.t.k. have formed the backbone of the Microbial Control Agents Project. 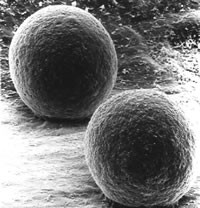 The most prominent success resulting from those efforts is the commercialization of Bacillus thuringiensis serovar kurstaki (B.t.k.). CFS researchers played a critical role in the development of this bacterium as an effective and viable alternative to synthetic insecticides for control of defoliating forest Lepidoptera, such as spruce budworms and gypsy moths. After 35 years of basic and applied research it is the product of choice for aerial forest protection programs in Canada, as well as elsewhere in the world, because of its excellent record for environmental safety. B.t.k. has been used on nearly 8 million hectares of insect-infested forest since 1985. Thanks to its success in forestry, B.t. is now enjoying worldwide commercial interest for use in agricultural crops as well as in other markets.

Research on B.t.k. has resulted in further elucidation of its mode of action in forest insects, including studies on the activity of various toxin proteins against forest insects (link to Toxin Specificity Data base), the role of gut proteases in activating the toxin proteins, their binding to receptors, and resulting effects on midgut cells. Research at the organism and population level has yielded better insights into processes underlying dose acquisition and dose expression, which have contributed to the formulation of a detailed spruce budworm-B.t. efficacy model and to improvements in the way B.t. is applied against forest defoliators.

Now that B.t.k. is an operational product under full commercial development, the focus of our B.t. research is shifting from basic research to research that supports product development and future innovations. The Project works hand-in-hand with a number of companies and end-users to facilitate the development and registration of improved forestry products. In addition, we have recently initiated a number of projects that focus on applying recent advances in recombinant DNA technology to create B.t.k. strains with improved activity against selected forest pests, in collaboration with the University of Montreal, the Biotechnology Research Institute, and commercial partners. A limited investment in basic research on B.t.k. mode of action in forest Lepidoptera is continued to support this effort.

The project was instrumental in developing, field testing and registering several products based on target-specific nucleopolyhedroviruses, in particular for control of gypsy moth (Dispar®), tussock moths (Virtuss®), and redheaded pine sawfly (Lecontvirus®). The rights to produce these agents commercially were transferred in 2009 to a private company, Sylvar Technologies, in Fredericton, N.B.

Research during the 1970s and 1980s focused on characterizing microsporidian parasites of forest defoliators and assessing their potential in inundative release programs. Because these parasites can only be mass-produced in living larvae, and because they exert mostly sublethal, debilitating effects on larval populations, interest in their development as a biocontrol agent waned and research in this area was terminated in the early 1990s. Research interest in Microsporidia was recently renewed, with a particular focus on Nosema fumiferanae, which is thought to be an important factor contributing to the decline of spruce budworm outbreaks. Studies are focusing on its rate of spread and transmission in spruce budworm populations (horizontal and vertical transmission), its interaction with those hosts, to provide a better understanding of how the pathogen can contribute to pest outbreak dynamics. 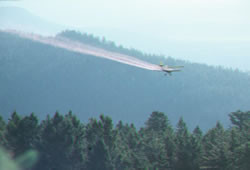 Our knowledge of pathogens of forest insects is limited by a historical research focus on lepidopteran pests, and by the use of rather inefficient methods (microscopic examination of diseased specimens). Our project is now applying much more efficient and more sensitivie molecular methods to take a new look at pathogen biodiversity in forest insect populations. Our search is directed by different criteria as well: rather than looking for pathogens that are suitable for mass production and aerial spray applications, we have shifted our attention to pathogens that can be used in classical biological control approaches aimed at maintaining pest populations below outbreak levels. Innoculative release of pathogens has been successful, for example, in controlling Rhinoceros beetle in the South Pacific (Oryctes virus), and the European spruce sawfuly (bacoluvirus) and gypsy moth (Entomophaga maimaigu) in Canada. The primary focus of this work in on management of established populations of invasive pests, such as emerald ash borer.