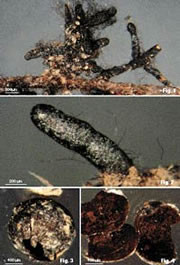 Ectomycorrhizae Descriptions Database (EDD) - EDD is a search tool which allows users to browse or search a database of ectomycorrhizae morphological descriptions. It has been developed with the purpose of bringing together as many published and unpublished descriptions as possible so as to serve as a comprehensive tool for identification of ectomycorrhizae in British Columbia and Pacific Northwest. It contains data from 341 published descriptions, 318 from Determination of Ectomycorrhizae (DEEMY) and Ingleby et al (1993) and 23 from a Manual of Concise Descriptions of North American Ectomycorrhizae (CDNAE) as well as data from close to 200 unpublished brief descriptions from Photoprofiles of Ectomycorrhizae (POE). The EDD can be searched either by browsing a catalog of EM types in the database or by a synoptic search of key features and characters. Entry of search profiles is done using a web form with all the characters in the CDNAE checklist, and links to the CDNAE illustrated glossary. The catalog and search results page also provided links to Matchmaker for Mushrooms of the Pacific Northwest if a description of the sporocarp mushroom of that species also occurs there, to images in either CDE or POE, and to GenBank for those EM types described in CDNAE or POE for which DNA sequence data have been accessioned. EDD is a replacement to a previous Database of Descriptions of Ectomycorrhizae (DDE) first published online in 2000 and became unavailable in March 2006 because of legacy software issues.

Photoprofiles of Ectomycorrhizae (POE) - This directory contains brief two page descriptions and photos for about 200 ectomycorrhizal types for EM fungal species that have been unpublished elsewhere to date, are for fungal species on different host species, or are for EM types for as yet unknown fungal species. These represent collections from ecological studies on EM fungi primarily in British Columbia. These descriptions are less complete than the concise descriptions published in CDNAE. The web page provides a list of all photoprofiles available and these can be viewed online or downloaded as PDF files. Data from the photoprofiles have been entered into EDD and can be included in the synoptic search. 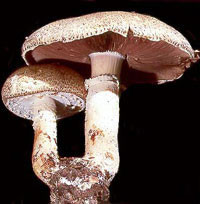 Matchmaker for Mushrooms of the Pacific Northwest (MMPNW) - In this aid to identifying mushrooms over 2000 gilled mushrooms of Washington, Oregon, Idaho, and British Columbia are presented. The program includes gilled mushroom descriptions and photos of gilled and non-gilled mushrooms, as well as a search tool for matching mushroom characteristics. This web version developed in 2001 and updated annually since then was created by the Canadian Forest Service with suggestions from Ian and Eli Gibson, the authors of the original CDROM version of the MMPNW program.